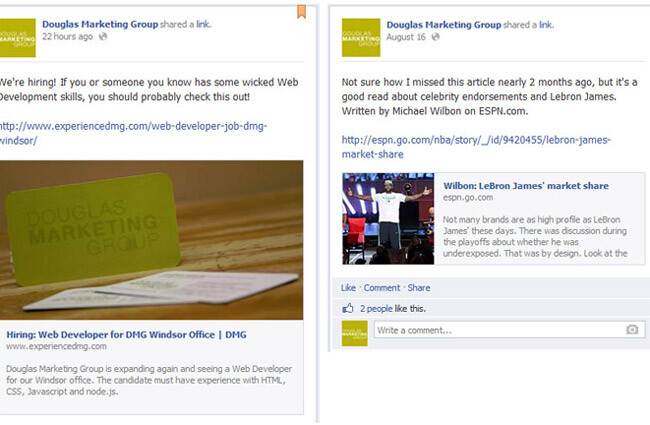 On March 7th of this year, Facebook announced with much fanfare that they would be launching a completely redesigned News Feed. The redesign would include huge improvements like larger photos, better organization of Likes & events and more consistency between the look & feel of both the desktop and mobile versions of the website. Well, here we are 6 months later and it finally seems some of those changes are slowwwwwly rolling out.

As I Tweeted yesterday afternoon, I noticed that both our business page Timeline and my own personal News Feed began increasing the size of the photos which were placed within status updates of hyperlinks. As you can see below in this before and after pictures, the size of the photo increased from a mini square sized 114px by 114px to a much larger 307px by 197px rectangle.

I then took a quick glance at my own personal News Feed and noticed the size and design of the same status update had also changed. The News Feed status looks mostly the same as it does on a Timeline but is slightly larger, at 398px by 208px.

I’ve been keeping my eyes peeled for any other subtle changes which may mark the coming of the entirely redesigned News Feed, but I haven’t seen much. The only other change I’ve noticed is the design of the status when someone becomes a Fan of a page or becomes Friends with someone new, as shown below.

Facebook’s delay in rolling out the redesigned Feed is not unexpected. Their team does quite a bit of internal and external testing before they launch a new look to the general public. The redesign of the recently launched Graph Search only became active for all users about a month ago, even though the idea was announced back in January.

Have you seen any changes that make you think the redesigned News Feed is anywhere near launching? Let me know in the comments!

For more from Sebastian check out his Google+ profile.