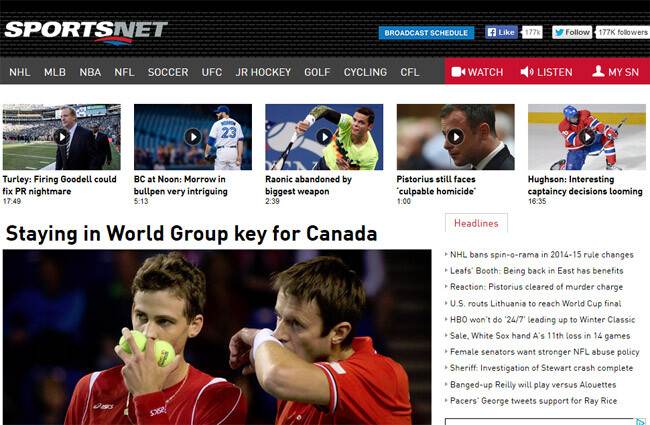 Sportsnet is doing a very heavy promotion of the new website with TV commercials, radio spots and more. One of the TV commercials even mentions the responsive design aspect of site. Unfortunately I couldn’t find that one online, but I’ve embedded one of the other commercials featuring former NHLer and current sports personality Nick Kypreos.

Sportsnet is seen by most as the second largest sports network in Canada, second only to ESPN owned TSN which has been around since the mid 1980’s. Sportsnet has often played catch-up to the larger and more established network but lately has been really pushing to even the playing field. The launch of this new website is seen as a huge step forward and definitely helps them jump ahead in the online realm. TSN’s website hasn’t been updated since the mid 2000’s.

The first thing that stands out to me about the new Sportsnet.ca is the clean look and feel. While the old website featured a black background moving to a white background, the new version features an entirely white background with plenty of spacing between sections.

The featured content on the homepage is also much more appealing. They’ve removed the sky blue header backgrounds and uppercase headings and improved it by changing the lettering to lowercase and placing it directly on the white background.

One of my favourite features of the new design is the main navigation drop down menus. Where boring links appeared on hover on the old website, you now see a full listing of what each section has to offer including featured stories and featured headlines. Mega drop down menus, as they’re called, are definitely becoming the norm for websites with a heavy amount of content. It’s a great way for users to be able to see even more content without having to actually click into a specific section of the website.

One of the key selling factors for the new Sportsnet.ca is its “available anywhere, anytime” factor. No longer will users who visit the site from a mobile device be short changed by how much content is available. Creating a responsive design allows users of any device, whether it be a PC, tablet or smartphone to see the exact same content in a view that’s appealing to them.

If you want to quickly test how the site is viewed on your smartphone, shrink the size of the site in your web browser and watch as it slowly re-organizes the content to fit the smaller window you’ve created.

This is a really smart move by Sportsnet. Having a website that is heavy in content and interactivity which can respond to the size of a users’ device is extremely beneficial. More and more people are visiting sites from mobile devices and they aren’t interested in seeing a watered down version of what they’re used to on their computer screen.

With the ever changing climate of the online space, it’s no surprise that Sportsnet has decided to update their website once again. If their goal was to reach a new audience not only on their PC but on their tablets and smartphones as well, I can say from my perspective that they’ve achieved it.

Not only is the site available across multiple platforms, but it looks great on all of them too. The addition of a mega drop down menu combined with the subtraction of unappealing aspects such as sky blue coloring and uppercase lettering make the site far more appealing and a pleasure to use.

Sportsnet has clearly sent out notice that they want the number one spot in Canadian sports broadcasting and for the time being, they have it as far as web design goes.

DrinkWolfhead.com is Something to Howl About